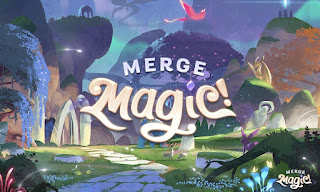 (BUSINESS WIRE) -- Zynga Inc. (Nasdaq: ZNGA), a global leader in interactive entertainment, today announced the worldwide launch of Merge Magic! - a brand new adventure puzzle game where players can lift the curse on mysterious new worlds by merging various creatures and by matching new items to win rewards that enable them to unlock enchanting new surprises along the way.

Merge Magic! is developed by Gram Games, the studio behind global hits like Merge Dragons!, 1010! and Six!. The game features lush, stunning new graphics and highly engaging gameplay that brings puzzle matching to your very own garden filled with unique and magical beasts. Have you ever wondered what a combined peacock and a cat would look like? In Merge Magic!, the ‘Peacat’ is just one of many never-before-seen, unimaginable hybrid animals you can discover in-game.

“We wanted to create a new puzzle game where players can merge anything together to create unique mythical creatures that no one has ever seen before,” said Eren Yanik, Chief Product Officer of Gram Games. “The possibilities are rousing in Merge Magic!, taking our signature ‘match and hatch’ gameplay to bewitching new heights, offering players lots of in-depth exploration and immersing them throughout their journey. Our future in-game events will also offer the community different ways to interact and enjoy the gameplay, not least of all our planned events for this coming autumn and Halloween.”

In Merge Magic!, players will discover enchanted tales and quests in the mysterious world of Mythia, where they can combine everything into better and more powerful items for their journey through ‘merging’. In the game, the only hope to lift the curse from the bewitched land rests in the player’s extraordinary power to merge anything - eggs, trees, treasures, stars, magical flowers and even mythical creatures.

“Merge Magic! transports players to fantastical new worlds where they will discover mythical creatures like the powerful unicorn and feisty fairy and create never-before-seen hybrids like combining an elephant and a butterfly to make a butterphant,” said Bernard Kim, President of Publishing at Zynga. “Players will find hours of enjoyment in discovering magical objects, creating creatures, and lifting curses on mysterious new realms.”

Eggs can hatch into magical wonders, which can evolve to uncover new, more powerful hybrid creatures. Players will encounter and solve challenging puzzle levels in which they match the items to win, then bring rewards back to their garden to collect and grow.

Get ready to reveal the magic as you merge your garden to perfection and nurture your amazing creations!

Discover hundreds of fantastic objects to match, merge and interact with in over 80 challenges!
Unearth fairies, unicorns, minotaurs and never-before-seen hybrid creatures like Peacats (peacock and cat) and many more.
An evil curse has been placed on the garden: Fight off the fog and lift the curse to restore, and take back the creatures’ home!
Watch out for witches: On your puzzle journey, you may cross paths with evil witches, so beware!
Participate in frequent events and win advanced beings to take back to your garden.

Merge Magic! is now available for iOS and Android as a free download.

To view the supporting assets for Merge Magic! including the launch trailer, please click here.

Zynga is a global leader in interactive entertainment with a mission to connect the world through games. To date, more than one billion people have played Zynga’s franchises including CSR Racing™, Empires & Puzzles™, Merge Dragons!™, Words With Friends™ and Zynga Poker™. Zynga’s games are available in more than 150 countries and are playable across social platforms and mobile devices worldwide. Founded in 2007, the company is headquartered in San Francisco with locations in the U.S., Canada, U.K., Ireland, India, Turkey and Finland. For more information, visit www.zynga.com or follow Zynga on Twitter and Facebook.

Gram Games is a mobile game development studio, committed to delivering high quality social games that create real bonds through play. Founded in 2012, and recently acquired by Zynga in 2018, Gram Games has built a team of industry professionals focused on creating engaging games for mobile platforms in their London and Istanbul studios - including Merge Dragons! and 1010! For more information, visit www.gram.gs.


Permalink : https://www.aetoswire.com/news/zynga-launches-spellbinding-new-puzzle-adventure-game-merge-magic/en
Posted by Business Daily Africa at 2:04 AM