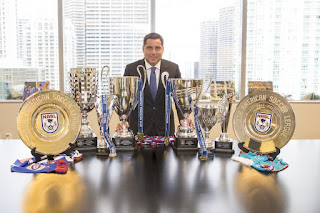 This is the eighth trophy in their four-year history and the sixth conquered in two seasons under coach Paul Dalglish's lead: "I couldn't be more proud of the boys taking the last step of the NPSL journey in winning this title again. It's an honour to be the coach of such an outstanding team".

Mares, who was named 'Man of the match' for the second successive year in the NPSL National Championship game, scored both his first-half goals after quick changes of possession. "It's hard to win something once, but to win it twice is unbelievable. We worked so hard to win this title again and the game was very difficult, against the best team we played all year", said the player.

In second-half stoppage time with the Cosmos pushing forward, Shawn Chin beat Cosmos goalkeeper, Paul Blanchette, who was off his line from 40 yards out. Moments later the final whistle blew and Miami Fc was confirmed as the first back-to-back National Championship winners in NPSL history.

Permalink : https://www.aetoswire.com/news/the-miami-fc-owned-by-silva-international-investments-wins-npsl-national-championship/en
Posted by Business Daily Africa at 1:20 AM