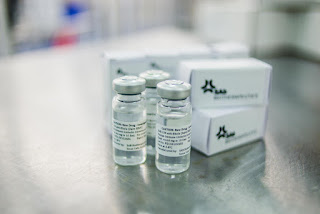 According to the World Health Organization, Ebola virus disease (EVD), formerly known as Ebola hemorrhagic fever, is a severe, often fatal illness in humans with an average fatality rate around 50%. Case fatality rates have varied from 25% to 90% in past outbreaks, and there is currently no licensed treatment proven to neutralize the virus.

During recent outbreaks of EVD in West Africa, passive immunotherapy with convalescent plasma containing polyclonal antibodies from recovered patients was used as an effective treatment. However, the amount and availability of these medicines are limited by the number of survivors.

SAB-139 was produced from SAB’s proprietary DiversitAb™ platform utilizing transgenic cattle (Tc Bovine™) to produce large amounts of natural human, rather than bovine, antibodies in response to an antigen—in this case EVD.

“This study demonstrates that a human polyclonal antibody-based product can be used to prevent EVD in the most advanced animal model available. This is impressive when one considers that SAB-139 did not require the use of plasma or cells from human EVD survivors,” said Jay Hooper, M.D., chief of the molecular virology branch of USAMRIID. “The ability to rapidly produce a human polyclonal antibody product without the need for material from infected animals or humans could be particularly useful when combating novel emerging infectious diseases.”

“Polyclonal antibodies are a powerful tool against emerging infectious diseases,” said Eddie J. Sullivan, PhD, SAB Biotherapeutics president and CEO. “They are our body’s natural defense to combat pathogens. With our platform, we can rapidly produce large amounts of targeted human antibodies without using humans—the limiting factor in current convalescent therapies in responding to a widespread outbreak.”

To produce the immunotherapy, Tc Bovine were vaccinated with the EVD antigen. Within a brief period of time, they produced significant amounts of fully human antibodies to combat the virus. Plasma was then collected, in the same way it’s collected from human donors, and purified to isolate the antibodies that become the treatment.