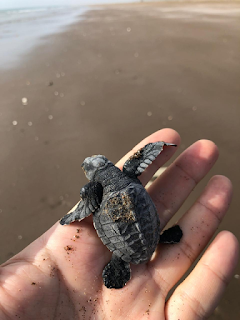 -HE Hana Al Suwaidi: The discovery adds to the list of the authority's achievements

-HE Marwan Al Sarkal: The events thanks to the relentless efforts of the (EPAA) reflect on Sharjah’s global status

On the occasion of the World Sea Turtle Day, which falls on June 16 of each year, the Environment and Protected Areas Authority in Sharjah announces the first nesting of Olive Ridley sea turtle in the country and it is considered the first of its kind locally. A sea turtle hatchling was recently observed crawling towards the sea from the beach of Kalba Kingfisher Lodge in Khor Kalba in the emirate of Sharjah. This is of great interest as sea turtle nesting is very rare on the eastern coast of the United Arab Emirates.

The result of the survey confirmed that the young turtles have successfully exited from the nest.

The morphological examination of the photos confirmed them to be the olive ridley turtle, the first record of their nesting recorded at the Alqurm Protected Area, in Khor Kalba, Sharjah. The area boasts of 500 hectares of ancient Crimean trees and a variety of wildlife. It has been declared as a Nature Reserve according to the Emiri Decree No. 27 of 2012 issued by His Highness Sheikh Dr Sultan bin Muhammad Al Qasimi, Member of the Supreme Council and Ruler of Sharjah.

HE Hana Saif Al Suwaidi, Chairperson of the Environment and Protected Areas Authority, said that a team from the Authority was dispatched to the site after receiving photographs of the hatchling to conduct an inspection in search of the turtle’s nest. The discovery adds to the list of the authority's achievements, under the esteemed guidance of His Highness Sheikh Dr Sultan bin Muhammad Al Qasimi, Member of the Supreme Council and Ruler of Sharjah.

“The team has located several tracks on the middle and upper part of the beach leading them to conclude that multiple turtles did successfully hatch and made it to the sea.” Al Suwadi said.

His Excellency Marwan bin Jassim Al Sarkal, Executive Chairman of the Sharjah Investment and Development Authority (Shurooq), commented: “The events which took place today, thanks to the relentless efforts of the Environment and Protected Areas Authority (EPAA), reflect on Sharjah’s global status in restoring, preserving and protecting its rich natural habitat and infrastructure; further contributing to the global protection of endangered wildlife and promoting responsible environmental change.”

He added: “Since Shurooq was established in 2009, we were steady to partnering with EPAA to play a role in promoting these virtues, born out of our historic heritage and care for the environment, and developed a number of eco-tourism projects such as Kalba Eco-tourism and the world-famous Kingfisher Retreat, operating under the “Sharjah Collection” brand by Shurooq and managed by ‘Mysk by Shaza’, both of which are developed close to Al Qurm Natural Reserve in Kalba, which has been refuge for a wide range of rare avian and aquatic life and it is an ideal breeding ground for sea turtles.”

He continued: “Such projects is part of Shurooq’s mission and vision to harness and promote Sharjah’s rich heritage and natural histories, as well as responsible tourism experiences, allowing visitors and tourists to engage and learn on the importance of preserving and sustaining wildlife for a better environmental future.”

The hatchling morphology conclusively shows that the nest belonged to an Olive Ridley Sea Turtle. This specie can be distinguished from other species due to its dark pigmentation, one claw and five or more lateral scutes on its carapace (shell). They get their name from the color of their heart-shaped shell, which starts out gray but becomes olive green once the turtles are adults. Previously, Green and Hawksbill sea turtles were the only two species recorded to nest in the United Arab Emirates. This observation is the first report of an Olive Ridley Turtle nesting in the UAE.

Olive Ridley’s are reportedly the smallest of the sea turtle species, weighing up to 100 pounds and reaching only about two feet in shell length. These turtles prefer residing in the open sea and migrate hundreds or even thousands of miles every year, and come together as a group only once a year for the arribada (mass nesting). Thousands of females may nest over the course of a few days to a few weeks during this time. These species feed on a variety of food items including algae, lobster, crabs, tunicates, mollusks, shrimp, fish and are considered the most abundant sea turtle species in the world.

It is estimated that these turtles live for 50 to 60 years. The principal causes of the worldwide decline of these turtles are long-term collection of eggs, killing of adults on nesting beaches, incidental capture in fishing gear, vessel strikes and marine debris ingestion.

The Environment and Protected Areas Authority seeks to protect the environment, natural reserves, wildlife and their biological diversity by conducting scientific studies and research and implementing measures for pollution control. In addition, the Authority seeks to increase awareness by educating individuals on the principles of sustainable development that could help preserve natural environmental resources, beneficial for the use and purpose of study among future generations.