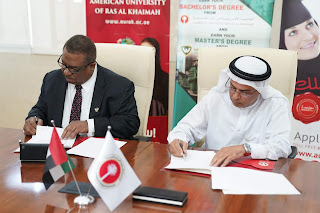 AURAK, an independent, public, state-owned, non-profit, coeducational institution offering undergraduate and graduate degrees based on the North American model with the cultural characteristics of the Gulf region, and WSU of Detroit, Michigan (USA), a public, urban research university known for academic and research excellence, success across a diverse student body, and meaningful engagement in its urban community, accredited by the North Central Association of Colleges and Schools and guided by the values of collaboration, integrity, innovation, excellence, and diversity and inclusion, officially celebrated their decision to strengthen their preexisting Transfer Student Program. The two institutions have maintained a previously established 3+2 Transfer Student Program since 2017, in which students can earn college degrees from both AURAK and WSU simultaneously. AURAK students who have completed three years of a four-year, pre-approved engineering program with a 3.0 grade point average and/or maintained a rank in the top quartile during their first three years of studies as well as having met the language proficiency level required by WSU can transfer to WSU to fulfill two years of a pre-approved curriculum. During the first year at WSU, the students are expected to complete sixteen hours of coursework and an undergraduate senior research project and either sixteen hours of coursework or eight hours of course work and eight hours of Master’s Thesis Research project the second year. Upon completion of the program, each student will receive both a Bachelor’s Degree in Engineering from AURAK and a Master’s Degree in Engineering from WSU.

The program has resulted in such high success that the two institutions have decided to bolster the agreement with additional faculty exchange, student exchange, and research opportunities. The universities look forward to utilizing each other through faculty exchange to enrich their faculty’s teaching experience and benefit the students of both institutions. Students from both institutions will be offered the opportunity to spend one to two semesters to engage in exchange programs, which include course work and access to the library and laboratory resources. AURAK and WSU have also agreed to include one another to collaborate on both preexisting and future joint research projects of mutual interest in which both universities will exchange statistical and technic al data, publications, and reports; encourage the exchange of visiting scientists; and organize various academic ventures such as seminars, workshops, and conferences on topics of mutual interest.

A delegation from WSU consisting of Keith Witfield, Provost and Senior Vice President of Academic Affairs, Ahmad Ezzeddine, Associate Vice President of International Programs, and Farshad Fotouhi, the Dean of Engineering traveled to AURAK to tour the campus; met with Professor Daniel Kirk, the AURAK Dean of Arts and Sciences, the AURAK Dean of Business, Professor Joseph Wallis, and AURAK students; and participated in a signing ceremony with an AURAK delegation consisting of Professor Hassan and all of the AURAK Provosts and Deans.

Prof. Hassan was overjoyed by the optimistic future of continued prosperity and student success that lay on AURAK’s horizon, "In Wayne State University we have a dignified collegiate ally which supplies our students multiple prospects, allowing for the progression of their cultural scope.”

Department of Communications and Public Relations