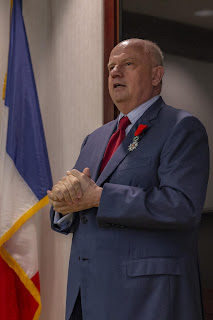 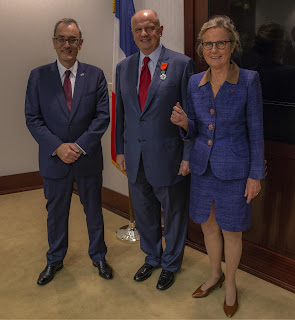 (BUSINESS WIRE)-- AGCO (NYSE: AGCO), a global leader in the design, manufacture and distribution of agricultural machinery and solutions, today announces that Martin Richenhagen, Chairman, President and Chief Executive Officer of AGCO Corporation, has been named a Chevalier (Knight) of the Légion d'Honneur (Legion of Honor) by the government of France. This high-ranking honorary decoration was bestowed during a recent ceremony held at AGCO’s global headquarters in Duluth, in the presence of the French Consul General in Atlanta, Louis de Corail.

The Legion of Honor, established by Napoléon Bonaparte in 1802, is the highest distinction conferred by the government of France. It is awarded to recognize those people and organizations that have made outstanding contributions to France in a variety of fields.

AGCO began operations in France, when the group became the parent company of the Massey Ferguson brand in 1994, taking ownership of the Beauvais Massey Ferguson plant. Opened in 1960, the Beauvais AGCO site remains today the Global Centre of Excellence for Massey Ferguson engineering and manufacturing, as well as the first private employer of the whole Picardie region. Summing up its operations from Beauvais, Ennery and Courcouronnes, as well as its joint ventures GIMA and AGCO Finance, AGCO has approximately 2,500 employees in the country. As continental Europe's second largest economy, and one of the largest markets for farm machinery, France represents a strategically important market for AGCO. In France, AGCO actively drives business activities centered on the design, manufacture and distribution of farm machinery, strongly contributing to the French economy.

This decoration is in recognition, under Martin Richenhagen’s leadership, of AGCO’s contributions to the development of France and France-USA relations.

Conferring the Legion of Honor on behalf of French President Emmanuel Macron, Dr. Monique Seefried, Chevalier in the Order of the Legion of Honor said: "I would like to thank Martin Richenhagen for his personal commitment and trust in our country's economy. I pay tribute, through him, to the strength of AGCO Corporation, a global leader in the design, manufacture and distribution of agricultural machinery and solutions, and to its willingness to expand and develop in Europe, and especially in France where AGCO’s French-made tractors are admired and respected. Tractors embody our past and our future, linking our ancient human roots in agriculture to the technological progress of the 20th century. Tractors bring us back to the land, to the oldest profession of farming while heralding the power of machinery and industry.”

Martin Richenhagen commented: “It is indeed an honor and privilege to receive this prestigious decoration from the French Government. I am delighted and proud to have our French operations receive such high recognition. In developing our business in Europe, a region which for AGCO is first in revenue contribution, France is a strategic market of great importance. During the past six years, we have invested more than 300 million euros in our Beauvais and Ennery operations, creating close to 300 new jobs to support our ambition for growth. This would not have been possible without the outstanding commitment of our 2,500 employees and this recognition is also theirs. We truly consider France as a business friendly environment supported by an entrepreneurial policy led by President Emmanuel Macron. We hope to make ever-more progress in our development, to contribute to further growing the relationship between France and the USA.”

Martin Richenhagen was selected by the Board of Directors in March 2004 as President and Chief Executive Officer of AGCO Corporation. He was appointed to Chairman of the Board on August 15, 2006.

Under his leadership, AGCO’s operations in France has been through outstanding transformation and success including the following key milestones:

2013 – The Beauvais 2 Cab facility and International Sales Training Centre for the Massey Ferguson brand opens. This 15.5 million euros investment created 100 new jobs.
2016 – The Beauvais site receives two coveted awards: Best Foreign Exporter 2016 as the first producer and exporter of farm machinery in France; and Factory of Year 2016 for its lean manufacturing implementation and number one in quality approach.
2017 – At Ennery, AGCO’s European Parts Warehouse and Distribution Centre moves from 30,000 m² to 100,000 m² and will create 62 jobs by the end of 2018 after a 2.1 million euros investment.
2018 – Only five years after the opening of its new cab facility, on August 28th, AGCO launches the operations of its new Logistic Centre in Beauvais after investing another 11 million euros and creating 103 new jobs.
About AGCO

AGCO (NYSE: AGCO) is a global leader in the design, manufacture and distribution of agricultural solutions and supports more productive farming through its full line of equipment and related services. AGCO products are sold through five core brands, Challenger®, Fendt®, GSI®, Massey Ferguson® and Valtra®, supported by Fuse® precision technologies and farm optimization services. Founded in 1990, AGCO is headquartered in Duluth, GA, USA. In 2017, AGCO had net sales of approximately $8.3 billion. For more information, visit http://www.AGCOcorp.com. For company news, information and events, please follow us on Twitter: @AGCOCorp. For financial news on Twitter, please follow the hashtag #AGCOIR.

Permalink : https://www.aetoswire.com/news/agco-chairman-president-and-chief-executive-officer-martin-richenhagen-receives-the-french-government39s-prestigious-legion-of-honor/en
Posted by Business Daily Africa at 12:46 AM